Warning: Use of undefined constant ‘DISALLOW_FILE_EDIT’ - assumed '‘DISALLOW_FILE_EDIT’' (this will throw an Error in a future version of PHP) in /misc/21/188/088/960/6/user/web/naijalifemagazine.com/blog/wp-config.php on line 28
 Okorocha says 89 percent of Nigerians are unhappy - Naijalife Magazine
Skip to content

In an interview with Vanguard,Okorocha said the statistics spurred him to establish the ministry of happiness and purpose fulfillment in the state. 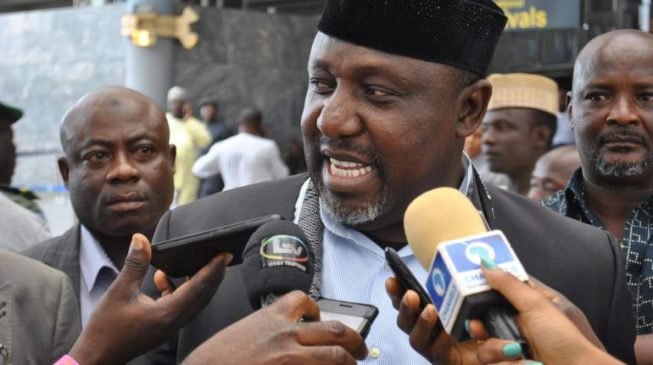 Okorocha said the ministry of happiness is key, and should be established by all governments before any other ministry.

He also suggested that “Happiness 101” should be introduced as a course in the country’s educational curriculum.

“I am elected governor to guarantee the happiness of the people. Even the American constitution was created for the pursuit of happiness,” Okorocha said.

“I have realised that 89 percent of Nigerians are not happy.

“Some went to research on it only to discover they have it in Dubai and other countries.
“Even my own type of happiness is more spiritual and in-depth than those ones.

“In fact, there should be a course in the primary, secondary and even university called Happiness.

“Yes, Happiness 101. You know why? Because, sometimes, you can be rich and not happy.”

Asked if he was running a family government by naming key institutions after his family members, Okorocha said “Rochas is bigger than Imo State. I am bigger than Nigeria”.

When the interviewer objected, telling him that no one is superior to the country, he explained that he meant he runs a large government.

“No, when I say ‘bigger’, I mean that this is not the only place I belong to. I mean I have gone beyond being an Imo man, beyond being a Nigerian.

“I am now an African. So, don’t put me like a small rat in a small hole. I have a bigger image than what people see.

“If you say I run a family government, that means I run a very big government.”

Speaking on his political ambitions in 2019, Okorocha said: “If Buhari says he will not run, I will produce my political sword and go into the field for the presidency.”

“I have not considered running for Senate. People think that is what I should do. I still cannot comprehend the fact that after being governor for eight years, I will run for Senate,” he said.

“I have looked into the senate and I have not seen myself sitting there. Unless some form of miracle happens then I might consider it. I might even prefer to become a local government chairman.”