Warning: Use of undefined constant ‘DISALLOW_FILE_EDIT’ - assumed '‘DISALLOW_FILE_EDIT’' (this will throw an Error in a future version of PHP) in /misc/21/188/088/960/6/user/web/naijalifemagazine.com/blog/wp-config.php on line 28
 Christmas: FCT residents lament high cost of goods - Naijalife Magazine
Skip to content

Some residents in the Federal Capital Territory (FCT) Abuja have decried the high cost of goods in the market due to the Christmas.

Some of them revealed on Friday that the cost of goods this year was higher than 2016.

Mrs Angela Ugwuafia, a mother of three, and a civil servant, said that shopping this year was quite difficult due to the hike in prices of goods.

“The market is not friendly at all, to be sincere, things are very expensive in the market and some items are three times more expensive compared to last year.

“What I am saying is that the price of things last year is more affordable than this year’’, she added.‎

Mrs Crystabel Akpan,‎ a mother of two and a public servant said the prices of things in the market had “sky rocketed’’.

Akpan attributed the increase to the Christmas season and the economic situation in the country.

“The government told us Nigeria is coming out of recession but we are not feeling ‎any changes at all. It has not reflected in the prices of goods and services.

“In fact, this year is worse than 2016. Last year, I was able to buy more things for my children.

“Clothes that were selling for N1,500 between October and November are now selling between N3,000 and N3,500. That is over a hundred per cent increase. 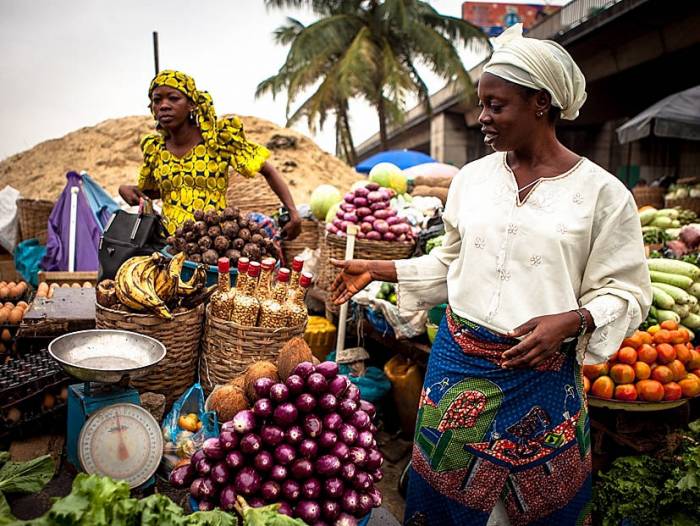 “When you ask the sellers, they will tell you Madam are you not in Nigeria, has anything changed? This is Christmas period.’’

Another mother of five, Mrs Mercy Abudul, who also spoke to NAN, said that 2016 Christmas season was more favourable compared to this year in terms of prices of things.

Abdul added that the recent fuel scarcity had also contributed to the hike in the prices of goods and services.

However, Miss Kemi Johnson, a single mother lamented the harsh state of the economy, saying there was no money to even go to the market.

According to her, Christmas is for those who have money to celebrate it.

“It is difficult to celebrate Christmas when you do not have money in your pocket.

“I have not seen better food to eat , you are asking me about Christmas. See my children, no money to even buy clothes for them.’’

Mrs Charity Ndukuba, a trader who also spoke to NAN lamented the decline in patronage.

“During the Christmas season, we usually have high sales because I sell gifts and kitchen items but this year, there is no market. ‎

“People are complaining that there is no money and if they do not have money to buy food, how can they buy gifts when they have not eaten.

“The situation is getting worse, its not like I had a lot of customers in 2016, but it was better compared to this year,’’ she said.

Tomato sellers blame lack of irrigation, others, for price increase in Kwara

CBN says the Nigeria-China currency swap deal will not cover the importation of the 41 items already blacklisted from the official foreign exchange.