Warning: Use of undefined constant ‘DISALLOW_FILE_EDIT’ - assumed '‘DISALLOW_FILE_EDIT’' (this will throw an Error in a future version of PHP) in /misc/21/188/088/960/6/user/web/naijalifemagazine.com/blog/wp-config.php on line 28
 Eagles victory worthy Sallah gift to Nigerians – fans - Naijalife Magazine
Skip to content

Football fans in Omu-Aran, Kwara, on Thursday said Super Eagles victory against the Indomitable Lions of Cameroon in the World Cup qualifier on Friday would be a wonderful Sallah gift for Nigeria. 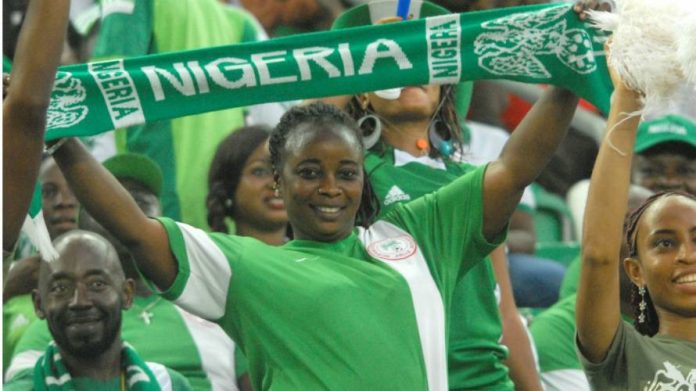 The fans who spoke in separate interviews with the News Agency of Nigeria (NAN) charged the Super Eagles to put in their best to secure victory in the match.

The fans contended that the match slated to hold at the Godswill Akpabio Stadium Uyo, coincides with the Eid-el-Kabir festival, as such “is a sign of divine luck for the eagles.”

The fans charge the Eagle to utilise the home advantage to secure the maximum three points against their opponent in the spirit of the celebration.

Zakariyau Bello, Chairman, Super Eagles Supporters Club, Omu-Aran said he was elated that the match would hold on Sallah day.

“I will not deceive you we have performed prayers for the Super Eagles to beat the Cameroonians and secure the maximum points.

“The match coinciding with Sallah has even given us the needed morale booster and the Eagles should also use the opportunity to come out victorious which will be our Sallah gift.

“This is not only for the Muslims celebrating Sallah but entire Nigerians,” he said.

Abdullahi Adeoye, a Viewing Centre Operator, said the fans are already in high spirit in readiness for a full blown celebration after an expected resounding victory for the Eagles.

“This will be a double celebration as the Muslims will have returned back from the praying ground to give their maximum support to the Super Eagles,” he said.

Adeoye, however, urged the team and its handlers to remain focus and unperturbed by the star studded Cameroonian side.

Yemi Aransiola, Director, Oyeyemi Sports Academy, Omu-Aran, urged the team not to allow the recent high performance of their opponents distract their plan.

“They should not give that respect to the Indomitable Lions; they should remain confident and focused in their game, and with this the team will come out victorious,” he said.