Like we’ve said multiple times, the immensely gifted Cynthia Erivo – who won a Tony, Emmy and Grammy for her breakout Broadway role in The Colour Purple – is set to take the big screen by storm this year.

Not only is she starring alongside Viola Davis in Steve McQueen’s upcoming heist thriller, Widows, she’s also set to shine in one of the most star-studded Hollywood movies of 2018, Bad Times at El Royale — which just got a gripping new trailer.

Helmed by Oscar-nominated screenwriter, Drew Goodard (The Martian), the movie follows seven strangers, each with a secret to bury, who meet at a run-down hotel in 1960s California. Over the course of one night, they all get one last shot at redemption before everything goes wrong. Erivo is playing a down-on-her-luck singer, who is simply at the wrong place at the wrong time. She’s joined by Chris Hemsworth (Thor), Jeff Bridges (Hell or High Water), Jon Hamm (Mad Men), Dakota Johnson (Fifty Shades of Grey) and many more.

The film is set to hit theatres on October 5. 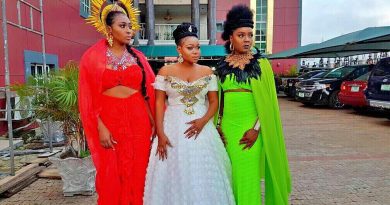 BTS: Chioma Akpotha, Lilian Esoro and others on the set of Ruth Kadiri’s ‘Somto’